Spectrum Signs has just completed a stunning and informative wall graphics display in the corridors of the Radisson Blu Hotel in Athlone.

Wall graphics that are eye catching, entertaining and educational.

In the weeks leading up to the refurbishment of the many function rooms in Athlone’s Radisson Blu Hotel, Fergus O’Donovan, the hotel manager, wondered what could be done to bring life and interest to the long corridors leading to the rooms… how to make them a point of interest as well as being purely functional. He made contact with Paul from Spectrum Signs, and along with Michael McDonnell (better known as ‘Viking Mike’) from the well known Viking Ship in Athlone, brainstorming began about the possibilities that were open to us and what themes could be used. We all agreed that because the hotel stands on an historic site overlooking the river, that the entire theme would be about the story of the Shannon navigation works, Athlone Woolen Mills that once stood on the site and the history of those that came centuries before… the Vikings and the Monks.

Fergus had a vision of what he wanted with regard to impact and colour schemes, Viking Mike was the source of all the history we needed from his experience of delivering it daily to his passengers aboard the Viking Ship, and so it was up to Spectrum Signs to gather the information and the imagery to make the vision a reality AND to have it designed, printed, made and fitted before the World Canal Conference, a huge event that was coming up three weeks later!

After initial artwork, revisions, proposals and counter proposals, it was decided to divide the themes between different walls and corridors. A combination of mounted plaques and wall graphics were used, with these techniques rotated as you walk along the corridors. Wall graphics illustrate the fearsome Vikings in one corridor, while on the other side, wall mounted raised boards tell the story of the building in the 1840’s of the present day bridge, quay walls and Athlone lock, along with the original architects drawings and maps of how Athlone looked before and after the works. On another corridor you can learn about the lives of the monks who lived on the Islands of Lough Ree and the Islands’ more recent inhabitants in the last century. 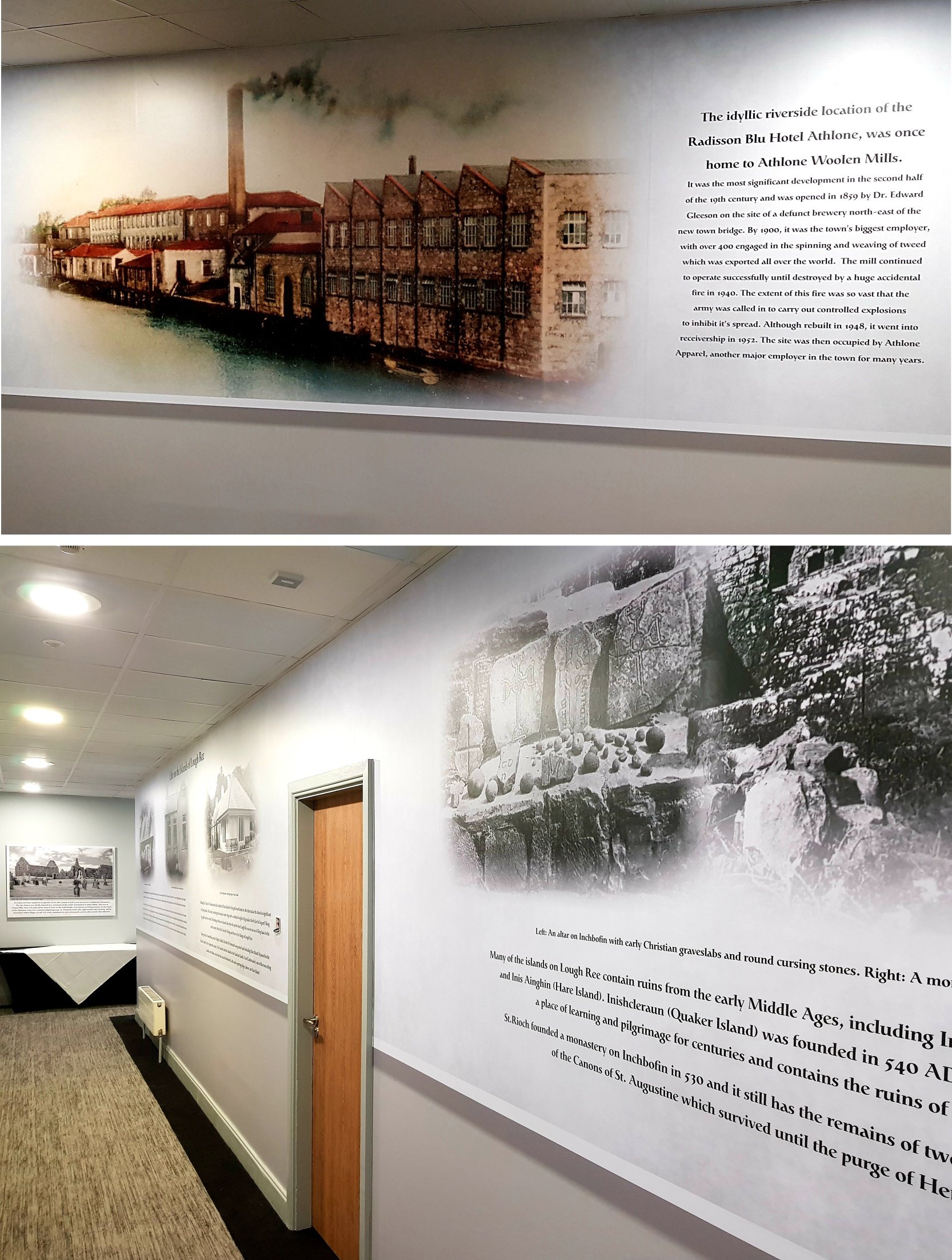 The objective for designing this wall graphics project was achieved. There are several state of the art function rooms off these corridors, each bringing a myriad of visitors to the hotel both for business and pleasure. With the aid of stunning wall art that tells the compelling story of the local area to these visitors, the corridors have been transformed form an otherwise mundane, functional space, to a major feature within the hotel that both pleases the eye and entertains!

Wall Graphics and feature walls like this can be designed for any environment to promote any idea in any business… Call us today to explore YOUR possibilities!